Rural areas must not be forgotten during rollout 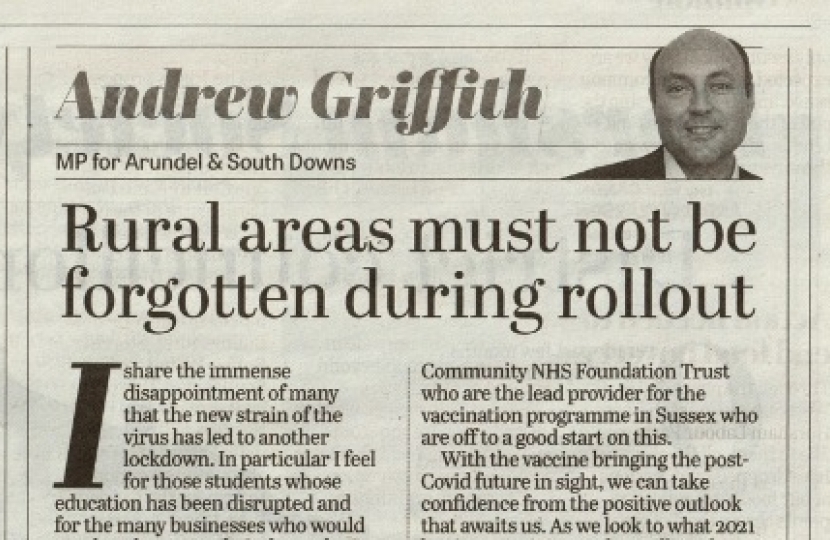 I share the immense disappointment of many that the new strain of the virus has led to another lock down. In particular I feel for those students whose education has been disrupted and for the many businesses who would much rather open their doors than survive on government support – however welcome that is in these difficult times, with the Chancellor announcing a further £4.5 billion package this week alone.

Once again we thank our key workers everywhere –in supermarkets, petrol stations, delivery drivers, posties, the emergency services and those on the frontline in our care homes, GP surgeries and hospitals.

I have spent my week working to give all my constituents a clear picture on where they stand in relation to the vaccine roll out locally. Things are moving fast and the latest position will always be on a dedicated website page at www.andrewgriffithmp.com.

Whilst Britain is doing exceptionally well compared to all of our European neighbours, it is critical that the programme builds momentum. It is essential that it does not become a two-tier system favouring urban areas with the most rural areas around Arundel, Petworth or Wisborough Green consigned to the vaccine slow lane – especially as they have more elderly populations and fewer medical facilities. I am working with the Sussex Community NHS Foundation Trust who are the lead provider for the vaccination programme in Sussex who are off to a good start on this.

With the vaccine bringing the post-Covid future in sight, we can take confidence from the positive outlook that awaits us.  As we look to what 2021 has in store, it is worth recalling that the so-called “roaring twenties” – one of the fastest periods of economic growth and prosperity in economic history - didn’t actually get going until the second year of that decade.  The Bank of England predicts the fastest economic recovery since World War II, with GDP rises of up to 8% a year once the virus is beaten.

As luck would have it, Global Britain will have lots of platforms to showcase its attractions. The UK Presidency of the G7 is just days away, the UK already holds the Commonwealth Chair, while the must-attend event of global leadership in 2021 will be the UK-hosted COP26 Climate Summit.

With the certainty of the Brexit trade deal, Whitehall resources are being re-coupled to the drivetrain of government.  Widely acclaimed policies announced during the pandemic such as the Ten Point Plan for a Green Industrial Revolution, the Energy White Paper and the Lifetime Skills Strategy can now be transformed into actions and those actions in turn support the growth of new and existing businesses, employment and prosperity.