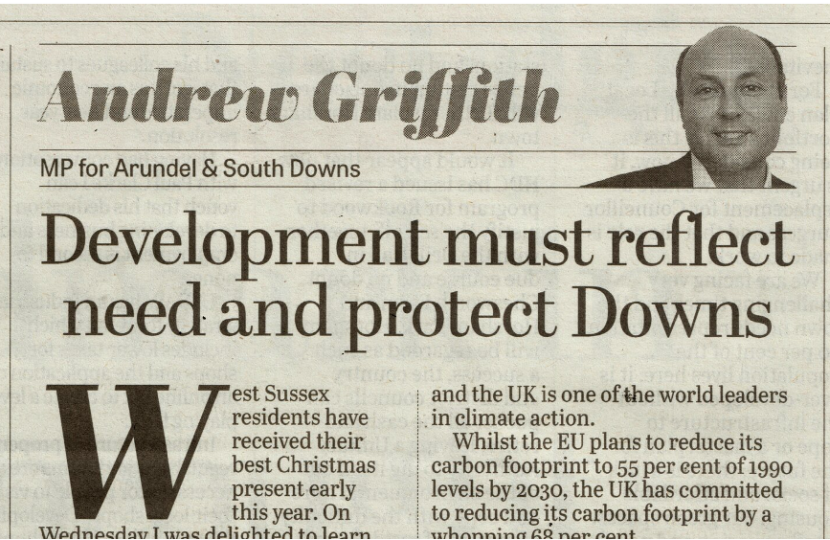 West Sussex residents have received their best Christmas present early this year. On Wednesday I was delighted to learn that I and my Conservative MP colleagues have been successful in preventing a controversial algorithm that would have significantly increased housebuilding across West Sussex. The Government will instead rightly concentrate development on our largest urban areas. Having raised this issue in my very first speech in Parliament and challenged the Government many times since it has not been comfortable as your relatively new MP but it was undoubtedly the right thing to do. With this clear direction of travel from the Government, I hope local planners will now also reprieve the residents of Barnham, Ford, Kirdford, Adversane, Cowfold, West Grinstead, Ashington, Henfield and the many other areas who feel besieged by inappropriate levels of development. New homes must reflect local need and be located where the infrastructure already exists or on brownfield sites, rather than concreting over green areas across our precious South Downs.

With this proposal shelved, it is a good time to remind ourselves that this is the greenest Government ever and the UK is one of the world leaders in climate action. Whilst the EU plans to reduce its carbon footprint to 55% of 1990 levels by 2030, the UK has committed to reducing its carbon footprint by a whopping 68%. You don’t hear that from the mainstream media or the ‘green lobby’.

This week, after more than 300 primary aged children submitted their wonderful designs, I am delighted to announce that the winner of my Christmas Card competition is Khadija Manzoor, aged 8, from Hurstpierpoint College Prep School. I could never have chosen between the talented entries so was very pleased to have recruited West Sussex children’s author and illustrator, Andréa Prior, to expertly judge. Andréa chose Khadija’s Christmas tree for its stand-out design and the use of rainbow colours which very nicely reflected the nation’s gratitude to the tremendous efforts of the all our frontline workers this difficult year. Every single entry can be viewed on my website.

This is my last column of 2020, so I wish all of my constituents a very happy Christmas and a huge thank you to all of those who will be working over the holidays in any capacity to take care of us. I’ll see you all again in the New Year and look forward to 2021 being a less eventful year and happier in many respects!