Debate on impact of housing development 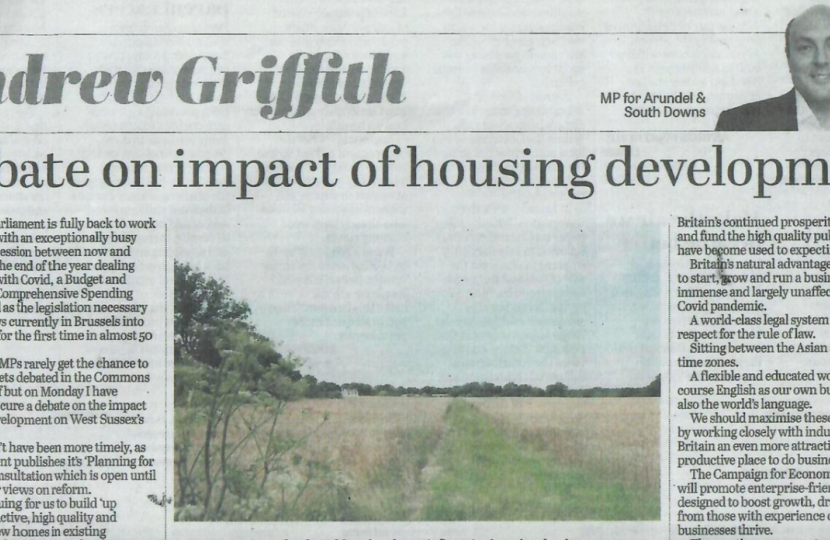 Parliament has returned, and on Monday 7th September I will lead an debate on the impact of housing development of West Sussex’s local communities. This debate couldn’t have come at a timelier moment, as the Government publishing its draft ‘White Paper’ on major planning reforms and running the ‘Planning for the Future’ consultation which is open until 29 October for views on the planning system.

Planning proposal responses are one of the single largest constituency issues that fill my weekly postbag. Protecting our Sussex countryside against unsustainable and anti-democratic large scale developments was one of my personal pledges when I ran for Parliament.

I will be arguing for us to build ‘up not out’ – attractive homes in existing towns and cities rather than new developments paving over our South Downs. Specific measures this could involve would be allowing more commercial-to-residential conversions and increasing permitted development rights to allow homeowners to extend without having to jump through so much red-tape.  Existing urban areas already benefit from facilities like train stations, leisure centres and healthcare, unlike developments on the unspoilt green fields of West Sussex. Those proposed by Mayfields or at Adversane and West Grinstead would all only be accessible by motor car. In the debate I will look forward to making this case and raising constituents deeply-held concerns with ministers, alongside my fellow West Sussex MPs.

Another initiative I am proud to be launching is the Campaign for Economic Growth. Polling has consistently shown the public is as concerned about the economy as about health, and they are right. It is only through a strong economy that we can pay for public services and start reducing the national burden from the major lockdown stimulus programmes. Only business can create the jobs, investment and tax revenues to ensure Britain’s continued prosperity.

Britain’s natural advantages as a location to start, grow and run a business are immense.
A world-class legal system with a strong respect for the rule of law. Sitting between the Asian and American timezones. A flexible and educated workforce and of course English as our own but increasingly also the world’s language.  We should maximise these advantages by working closely with industry to make Britain an even more attractive and productive place to do business.

The Campaign for Economic Growth will promote enterprise-friendly policies designed to boost growth, drawing ideas from those with experience of helping businesses thrive.  One practical idea we will be pressing for is a new Office of Regulatory Assessment to improve productivity and the supply-side of the economy. Some regulation is of course necessary to protect employees, consumers and the environment. However, the creative responses through the lockdown – allowing restaurants to sell takeaway food without lengthy planning permissions – has given a glimpse how we should reconsider the UK regulatory burden from first principles and boost growth for the recovery.