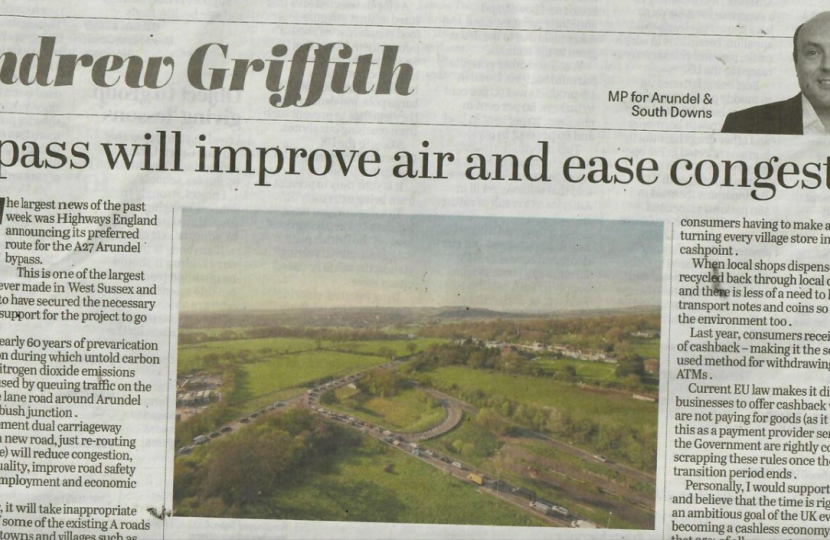 The largest news of the past week was Highways England announcing their Preferred Route for the A27 Arundel bypass.

This is one of the largest investments ever made in West Sussex and I am pleased to have secured the necessary Government support for the project to go ahead. It follows nearly sixty years of prevarication on the decision during which untold CO2 and Nitrogen dioxide emisisons have been caused by queuing traffic on the current single lane road around Arundel and the Crossbush junction. The replacement dual carriageway (as this is not a new road, just re-routing an existing one) will reduce congestion, enhance air quality, improve road safety and support employment and economic growth.  Importantly, it will take inappropriate HGV traffic off some of the existing A roads through small towns and villages such as Pulborough and Storrington improving both safety and air quality.

However, I was disappointed that alternative routes which would have had far less impact on the residents of Walberton, Binsted and Tortington were blocked by certain areas having protected status and by the failure of the South Downs National Park Authority to endorse any route within its boundary. I am committed to supporting these residents in getting the best noise mitigation, road design and, where appropriate, swift compensation.

The Government took a useful step on access to cash in rural communities this week by suggesting that cashback facilities be offered at shops without, as now, consumers having to make a purchase – turning every village store into potential cashpoint. When local shops dispense cash, it is recycled back through local communities and there is less of a need to hold or transport notes and coins so it is better for the environment too.

Last year, consumers received £3.8 billion of cashback – making it the second most used method for withdrawing cash behind ATMs. Current EU law makes it difficult for businesses to offer cashback when people are not paying for goods (as it regulates this as a payment provider service) and the Government are rightly considering scrapping these rules once the Brexit transition period ends.

Personally, I would support going further and believe that the time is right to set an ambitious goal of the UK eventually becoming a cashless economy, meaning that 95% of all payments are made without the use of physical notes and coins. There are real issues of access to be overcome although I believe many of these are readily soluble through innovation given that a greater proportion of vulnerable groups in society now own a mobile phone than have a bank account.

A27 improvements at Arundel

UPDATE - A27 ARUNDEL IMPROVEMENTS CONSULTATION: National Highways have opened a Public Consultation for the A27 Arundel Improvements from Tuesday 11th January until Tuesday 8th March 2022. You are able to have your say on the final route design by commenting during the consultation.