Build homes where the infrastructure exists 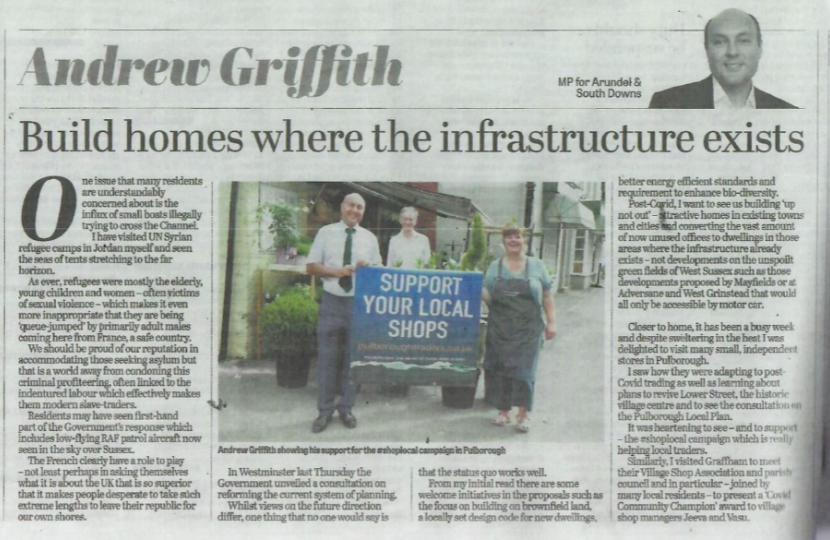 One issue that many residents are understandably concerned about is the influx of small boats illegally trying to cross the Channel. I myself have visited UN Syrian refugee camps in Jordan myself and seen the seas of tents stretching to the far horizon. As ever, refugees were mostly the elderly, young children and women - often victims of sexual violence - which makes it even more inappropriate that they are being 'queue-jumped' by primarily adult males coming here from France, a safe country. We should be proud of our proud reputation in accommodating those seeking asylum but that is a world away from condoning this criminal profiteering, often linked to the indentured labour which effectively makes them modern slave-traders.

Residents may have seen first-hand part of the Government’s response which includes low flying RAF patrol aircraft now seen in the sky over Sussex. The French clearly have a role to play – not least perhaps in asking themselves what it is about the UK that is so superior that it makes people desperate to take such extreme lengths to leave their republic for our own shores!

In Westminster last Thursday the Government unveiled a consultation on reforming the current system of planning. Whilst views on the future direction differ, one thing that no one would say is that the status quo works well. From my initial read there are some welcome initiatives in the proposals such as the focus on building on brownfield land, a locally set design code for new dwellings, better energy efficient standards and requirement to enhance bio-diversity. Post-Covid, I want to see us building ‘up not out’ – attractive homes in existing towns and cities and converting the vast amount of now unused offices to dwellings in those areas where the infrastructure already exists - not developments on the unspoilt green fields of West Sussex such as those developments proposed by Mayfields or at Adversane and West Grinstead that would all only be accessible by motor car.

Closer to home, it has been a busy week and despite sweltering in the heat I was delighted to visit many small, independent stores in Pulborough. I saw how they were adapting to post-Covid trading as well as learning about plans to revive Lower Street, the historic village centre and to see the consultation on the Pulborough Local Plan. It was heartening to see – and to support – the #shoplocal campaign which is really helping local traders. Similarly, I visited Graffham to meet their Village Shop Association and Parish Council and in particular – joined by many local residents – to present a ‘Covid Community Champion’ award to village shop managers Jeeva and Vasu.