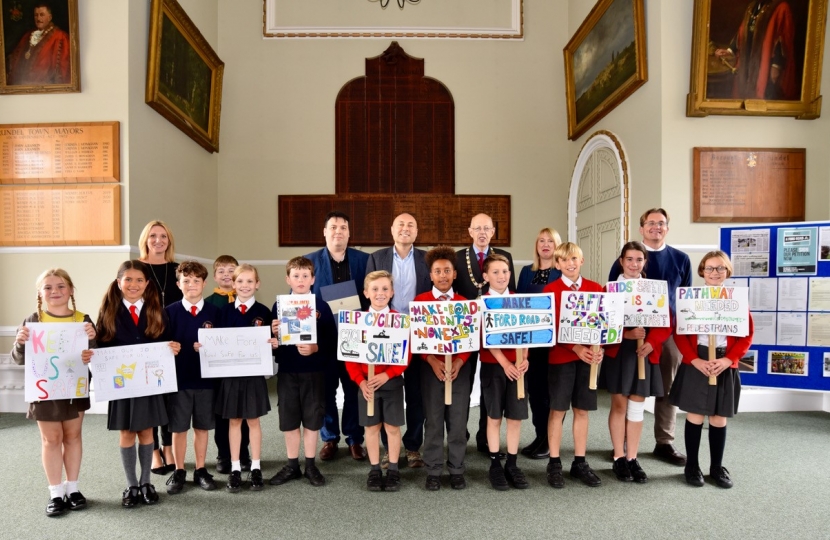 Arundel schoolchildren made a special presentation to councillors on Friday (1st October), joined by the Arundel Mayor and Arundel and South Downs MP Andrew Griffith, in the Arundel Town Hall.

The children read out statements about why the route is needed and displayed colourful posters they had made to highlight their concerns.

Cllr Shaun Gunner gratefully received the box from the children and confirmed his support for the pathway.  He told them that the project has his support and that, as a non-driver, he is reliant on cycling, walking and public transport.

Joy Dennis accepted her box, telling the children that she recognises the safety issues in travelling between Arundel and Ford, and that the pathway is one of the top projects on the County Council’s list.

Andrew Griffith was one of 56 community leaders who signed a letter of support for the project following the publication of the Town Council’s report ‘Arundel to Ford Station Cycle and Walking Route: Making Cycling and Walking Safer’, in February 2021.

“The children delivered their presentations with great confidence.  It is ultimately for their benefit that we all want to see the Arundel to Ford route made safer with a new pathway for walking and cycling.

“The schools have an important part to play as voices in our community, and it is great to see the children getting involved.”