Another example of a flawed algorithm 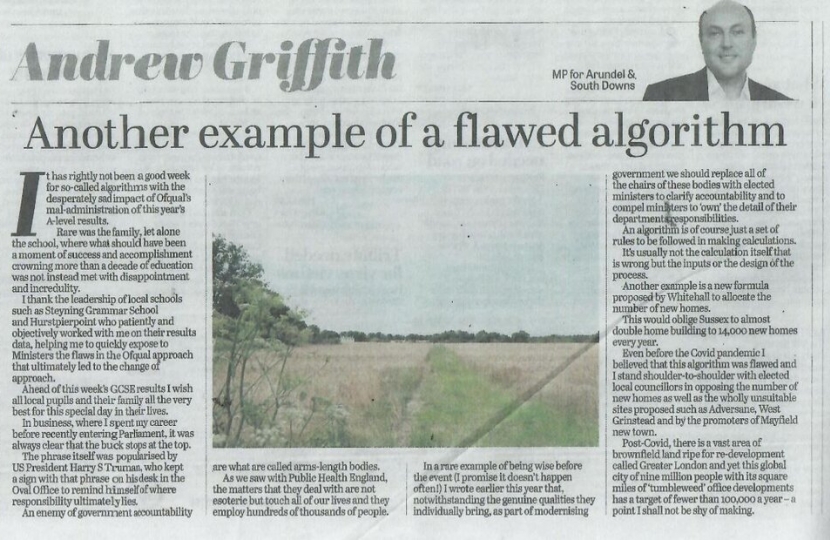 It has rightly not been a good week for so-called algorithms with the desperately sad impact of OFQAL’s mal-administration of this year’s A-Level results. Rare was the family, let alone the school, where what should have been a moment of success and accomplishment crowning more than a decade of education was not instead met with disappointment and incredulity.

I thank the leadership of local schools such as Steyning Grammar School and Hurstpierpoint who patiently and objectively worked with me on their results data, helping me to quickly expose to Ministers the flaws in the OFQAL approach that ultimately led to the change of approach. Ahead of this week’s GCSE results I wish all local pupils and their family all the very best for this special day in their lives.

In business, where I spent my career before recently entering Parliament, it was always clear that the buck stops at the top. The phrase itself was popularised by U.S. President Harry S. Truman, who kept a sign with that phrase on his desk in the Oval Office to remind himself of where responsibility ultimately lies. An enemy of government accountability are what are called arms-length bodies. As we saw with Public Health England, the matters that they deal with are not esoteric but touch all of our lives and they employ hundreds of thousands of people.

In a rare example of being wise before the event (I promise it doesn’t happen often!) I wrote earlier this year that, notwithstanding the genuine qualities they individually bring, as part of modernising government we should replace all of the chairs of these bodies with elected ministers to clarify accountability and to compel ministers to ‘own’ the detail of their departments responsibilities.

An algorithm is of course just a set of rules to be followed in making calculations. It’s usually not the calculation itself that is wrong but the inputs or the design of the process. Another example is a new formula proposed by Whitehall to allocate the number of new homes. This would oblige Sussex to almost double home building to 14,000 new homes every year.

Even before the COVID pandemic I believed that this algorithm was flawed and I stand shoulder-to-shoulder with elected local councillors in opposing the number of new homes as well as the wholly unsuitable sites proposed such as Adversane, West Grinstead and by the promoters of Mayfield new town. Post-COVID, there is a vast area of brownfield land ripe for re-development called Greater London and yet this global city of nine million people with its square miles of ‘tumbleweed’ office developments has a target of fewer than 100,000 a year – a point I shall not be shy of making.