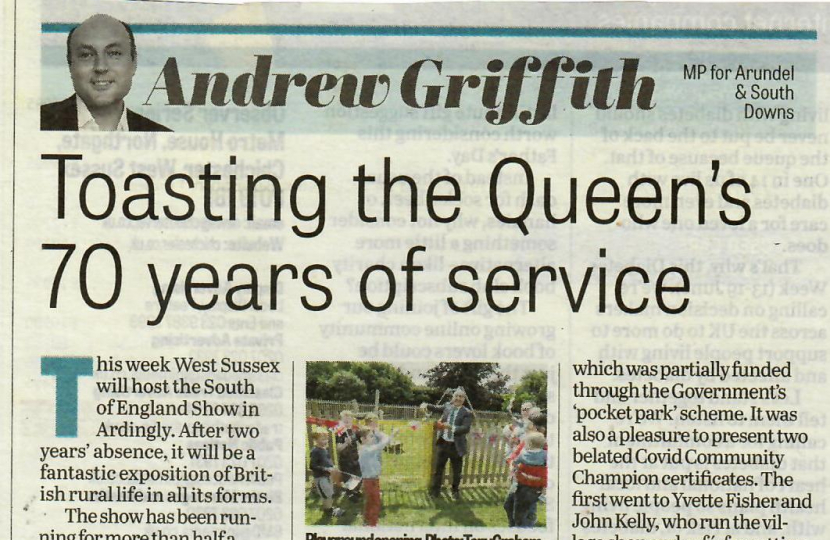 This week West Sussex will host the South of England Show, held in Ardingly.  After two years’ absence, it will be a fantastic exposition of British rural life in all its forms. The show has been running for over half a century and demonstrates the vibrance and diversity of British farmers and the fantastic contribution they make to our national life, our environment and our food supply. The recent events in Ukraine remind us of the importance of domestic food production and we are lucky to have such high-quality farms and food processing businesses in Sussex. They deserve our support as consumers as well as by the government as it creates a programme of agricultural support tailored for the needs of the U.K.

It was a privilege to be able to attend so many Platinum Jubilee events over the last week. From watching Trooping the Colour on Horseguards Parade to Jubilee beacons high up on the South Downs to Union Jack-bedecked events in villages and towns there were so many instances where communities came together to thank Her Majesty for her 70 years of service.

On Saturday, I was delighted to join Clapham & Patching Parish Council to officially open their new children’s playground on the Recreation Fields, as part of the Platinum Jubilee celebrations.   The playground was partially funded through the Government’s ‘pocket park’ scheme.

As well as cutting the ribbon, it was also a pleasure to present two belated Covid Community Champion certificates which had been postponed over the pandemic.  The first went to Yvette Fisher and John Kelly, who run the village shop and café, for setting up a community Whatsapp group allowing local residents to support their shielding neighbours during the lockdowns, including by sourcing food from local butchers, a bakery and several supermarkets. The second went to Terry and Gilly Gale for setting up a similar arrangement in the Clapham Common part of the village, including personally collecting and delivering groceries and prescriptions. Their community-spirited example is an excellent demonstration of the type of dedicated service embodied by the Queen over her seventy-year reign.