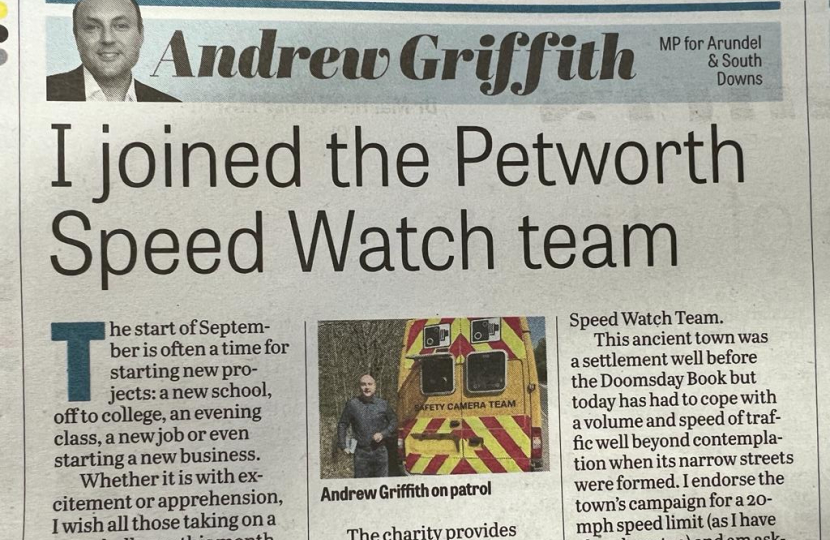 The start of September is often a time for starting new projects: a new school, off to college, a new job or even starting a new business.

Whether it is with excitement or apprehension, I wish all those taking on a new challenge this month all the very best.

On Saturday, I visited the ABC Animal Sanctuary in West Chiltington, for their annual fun weekend, as part of their impressive fundraising programme.  The excellent work of the volunteers in caring for a wide variety of animals is impressive.

The sanctuary takes in all kinds of animals from cats and dogs to birds and goats, all of whom have arrived at the sanctuary needing help.

The charity provides them with all the care they need to return to full health and aims to find them a permanent home.

A hot, dry summer has been intolerable for some residents living close to roads plagued by the minority of anti-social motorcyclists who give their fraternity a bad name.

I'm an earlier riser so I've been around seeing the impact for myself - at Tillington on Bank Holiday Monday and this Sunday joining the #Petworth Speed Watch Team.

This ancient town was a settlement well before the Doomsday book but today has had to cope with a volume and speed of traffic well beyond contemplation when its narrow streets were formed.  I endorse the town's campaign from a 20mph speed limit (as I have elsewhere too) and am asking @ Sussex Police and @WSCC you support it.

The most serious business in Westminster this month will be how we tackle higher energy costs caused by the Russian invasion of Ukraine and their attempts to use the EU’s dependence on Russian gas as a lever to Jack up prices for everyone.  I headed back to Parliament this week with a very clear sense of the concern that many households and businesses have.