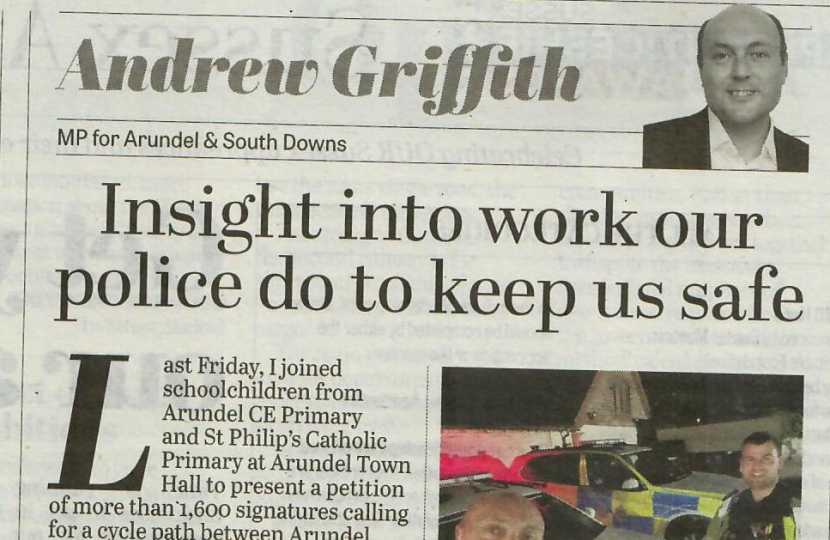 Last Friday, I joined schoolchildren from Arundel CE Primary and St Philips Catholic Primary in Arundel Town Hall to present a petition of more than 1,600 signatures calling for a cycle path between Arundel and Ford.   The petition was accepted by Councillor Shaun Gunner, the Leader of Arun District Council, and Councillor Joy Dennis, Cabinet Member for Highways at West Sussex County Council, who each talked of their respective Authority’s support for this proposal. The schools have an important part to play as voices in our community and it was great to see the pupils getting involved. I am pleased that progress appears to be being made to get this plan off the ground.

Later that day, I joined the 9-hour late shift with Sussex Police’s Road Policing Unit, to see the challenges that they face in their important work in keeping road users safe.  PC Tom Van Der Wee was an excellent guide as we patrolled in his unmarked car. The shift started smoothly with stops of a speeding biker recklessly pulling wheelies at Fontwell and a flatbed truck for having a dangerously insecure load near Littlehampton. Later in the evening, we attended a major road traffic accident involving ten vehicles on the A27 at Lancing which mercifully only resulted in minor injuries for those involved.  The driver who appeared to be the cause was arrested on suspicion of driving under the influence. Not the best start to the weekend for the many thousands of West Sussex who were inconvenienced and delayed by one idiot though! We finished the patrol after 1.00 am having racked up over 150 miles and seen a number of motorists risking their lives and others by law-breaking.  The shift was a useful insight into the work our police do at all hours of the day to keep us safe.

One place that there won’t be any speeding motorists is the A285 which is closed at Seaford College after a portion of the road was washed away by heavy rains.  I have been focussing on this with local County Councillor Tom Richardson and I will continue to engage with WSCC as they make the necessary repairs as urgently as possible on this importa