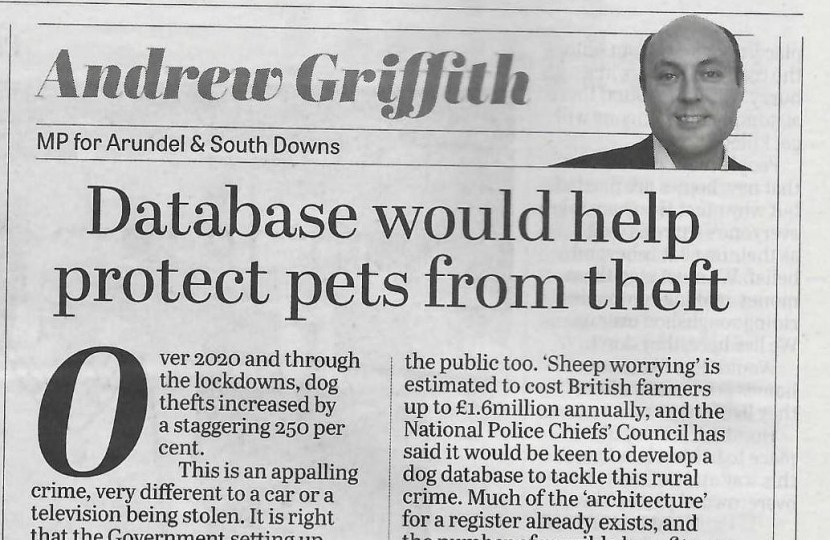 Over 2020 and through the lockdowns, dog thefts increased by a staggering 250%.

This is an appalling crime, very different to a car or a television being stolen. It is right that the Government setting up the Pet Theft Task Force and is considering tougher sentences.

One measure that I would support is setting up a dedicated ‘Doggie DNA’ database. Since 2016, all dogs must be microchipped and details registered every time they change owners. However, we know that pet thieves cruelly remove dogs’ microchips themselves to make them untraceable. It makes sense to instead log the dog’s DNA, which is un-erasable. If a pet were ever involved in an ownership dispute, the database will prove beyond question its identity and legal owner.

This would have many benefits beyond stopping the stolen pet trade in its tracks, as it also would stem the flow of ‘puppy mills’, by tracing the genetic origin of newly registered dogs and holding irresponsible breeders to account. Another use would be to improve vet medicine and canine conservation overall, as researchers would have a deep pool of data to stop rare breeds from going extinct and to track genetic diseases.

The database would not only protect dogs, but other animals and the public too. ‘Sheep worrying’ is estimated to cost British farmers up to £1.6m annually, and the National Police Chiefs’ Council has said it would be keen to develop a dog database to tackle this rural crime. Much of the ‘architecture’ for a register already exists, and the number of possible benefits are enormous for simply converting it to capture DNA rather than inserting microchips.

In other news, I am delighted to support South Downs National Park’s campaign ‘Trees for Downs’. They have smashed their original fundraising target, and have upped the new target to £260,000, which will allow them to plant some 100,000 trees across the Downs.

This is necessary to restore trees that have been lost over the past few decades, including to Ash Dieback (which could kill over 90% of Britain’s ash trees in the next decade) and Dutch Elm Disease (which has already seen the loss of 60m British elms to date).

Many replanted trees are disease-resistant elms, which are key as they are the closest ecological match and support many of the same insect and butterfly species.

I would encourage everyone to support the campaign’s replanting of iconic species including black poplar, oak, field maple and disease-resistant elms in community spaces, along roads and popular walking routes.