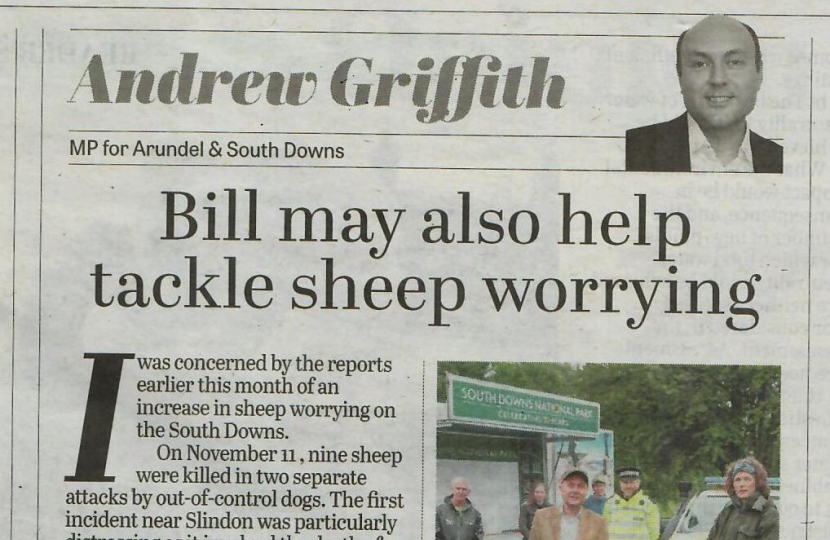 I was concerned by the reports earlier this month of an increase in sheep worrying on the South Downs – on November 11, nine sheep were killed in two separate attacks by out of control dogs.   The first incident near Slindon was particularly distressing as it involved the death of eight pregnant ewes, and the loss of a further 140 yet-to-be-born lambs.  In another attack two days later, eight lambs were found dead near Pulborough.  Careless dog owners cause great harm to rural communities, and both the farmers and Sussex Police have my full backing in tackling this crime.

Tackling sheep worrying would be one beneficial side effect of the Private Members Bill I introduced last July in Parliament to set up a Doggie DNA database, so that dogs and their owners can be traced if necessary after such attacks. ‘Sheep worrying’ is estimated to cost British farmers up to £1.6m annually, and the National Police Chiefs’ Council has said it would be keen to develop a dog database to tackle this rural crime. The database would have other primary uses, including preventing puppy farming, tracing stolen pets, and providing valuable material for veterinary research into genetic canine diseases.  The “Second Reading” of my Bill will be in March 2022, and I hope to secure government support to bring forward these measures to keep both dogs and sheep safe from harm.

We have all by now heard about the Omicron variant first identified in South Africa at the weekend. It is understandable to take a precautionary approach for the minimum period that it takes to evaluate this variant. The Government has taken a balanced approach and this is not a return to another lock down – not least of which due to the success of the vaccine.  I am encouraged that booster jabs will also be rolled out on a phased basis to all 18-39 year olds.

We’ve got to save Christmas and the one thing we can each do is to get our booster jab as soon as we are eligible.