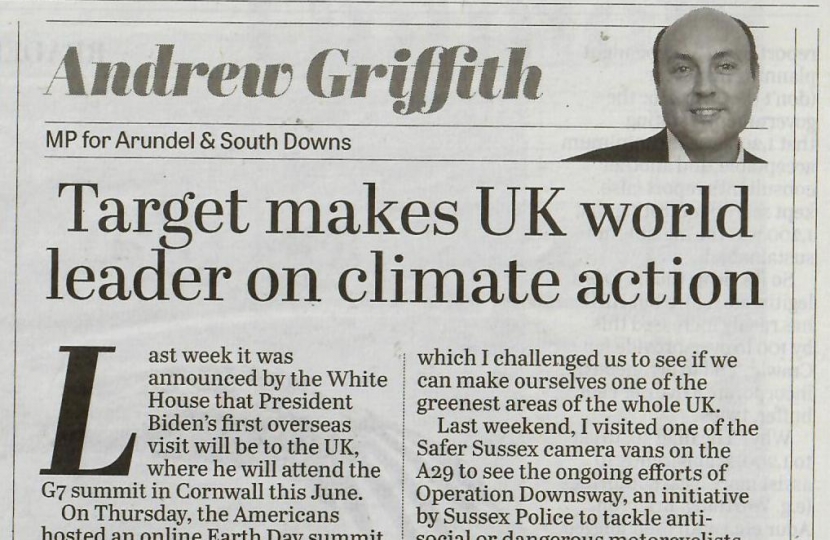 Last week it was announced by the White House that President Biden’s first overseas visit will be to the UK, where he will attend the G7 summit in Cornwall this June.   On Thursday, the Americans hosted an online ‘Earth Day’ summit for national leaders to discuss climate change, at which the UK was the standout performer, following Prime Minister Boris Johnson’s commitment to the world’s most ambitious climate target being enshrined into law by June, reducing emissions by 78% by 2035 compared to 1990 levels. This, in effect, brings forward the UK’s previous 80% target by nearly 15 years, making us the world leader on climate action – well ahead of either the EU and the US.

As if to underline the local relevance of these issues, on Tuesday evening I spoke to the ‘Greening Steyning’ group to discuss how residents and businesses could take practical actions themselves to contribute to the fight against climate change by taking simple and everyday steps. The event was attended by over 200 villagers and I previewed the Government’s business campaign for climate which every small business can sign up to (www.smeclimatehub.org/uk) and for which I challenged us to see if we can make ourselves one of the greenest areas of the whole UK.

Last weekend, I visited one of the ‘Safer Sussex’ camera vans on the A29 to see the ongoing efforts of ‘Operation Downsway’, an initiative by Sussex Police to tackle anti-social or dangerous motorcyclists and car drivers. Whilst not eliminating the problem entirely – which has been augmented by the recent dry spell over recent weekends – this operation has been doing excellent work and I hear clearly from residents that it is making a difference and the message is starting to spread that the South Downs are not the place to come for high speed or noisy joyrides.

Later in the week I joined residents in Barnham to meet a representative from Southern Water to discuss how to solve long standing problems relating to sewer capacity in their area. The unpleasant problem of backed up drains or sewers overflowing during storm conditions is not unique to this part of West Sussex and householders have my full support. Capacity issues like these – whether about sewage, places in local schools or traffic congestion - underscore the importance of ensuring that there is sufficient infrastructure in place before new developments are given approval.