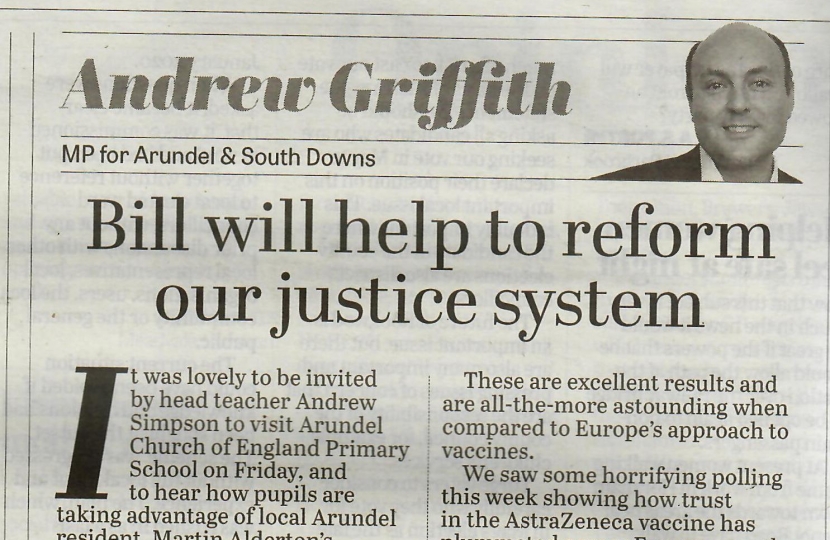 It was lovely to be invited by Headteacher Andrew Simpson to visit Arundel Church of England Primary School on Friday, and to hear how pupils are taking advantage of local Arundel resident, Martin Alderton’s excellent project to encourage children to plant wildflower seeds around Arundel to help pollinators. The pupils had put together a wonderfully informed presentation about bees’ vital role in keeping plants and crops fertilised – and the bees were especially busy as the early spring sun shone on a bright blue Sussex afternoon.

Just a few hours later I was queuing to receive my first dose of the Oxford AstraZeneca vaccine as part of a new record high weekend of vaccine delivery. Having visited so many vaccine clinics over the last few months at least I knew what to expect and knew I’d find the same dedicated team. Nationally, on Saturday a staggering 873,000 citizens received their vaccine in a single day whilst over the weekend the milestone of 30 million vaccines delivered was hit meaning that the vast majority of vulnerable groups and over 50% of the adult population have now received at least one dose.

These are excellent results and are all-the-more astounding when compared to Europe’s approach to vaccines. We saw some horrifying polling this week showing how trust in the AstraZeneca vaccine has plummeted across Europe over the last month in the wake of reckless comments from EU leaders and the poor handling of the rollout by various member countries. Despite a clear and unambiguous endorsement by the WHO, an unbelievable 61 percent of people in France now think the AstraZeneca vaccine is unsafe, 55 percent of Germans and 52 per cent of those in Spain. If nothing else, proving words have consequences.

Last week in Parliament we started to debate the many clauses of Police, Crime Sentencing and Courts Bill.  I noted how the Bill will include stiffer sentences for dangerous driving and those caught driving while impaired by drink or drugs.  The Bill will also reform our justice system, ensuring that serious criminals, such as violent or sexual offenders will spend longer behind bars. I welcome that it will also deliver increased protection for victims of domestic abuse, an issue which has rightly received greater attention during the coronavirus lockdowns.

Andrew asks Chancellor for help in protecting greenfields from overdevelopment

Andrew has called on the Chancellor to introduce a stamp duty break for ‘downsizers’ to help prevent new housing development on greenfield sites in rural West Sussex.