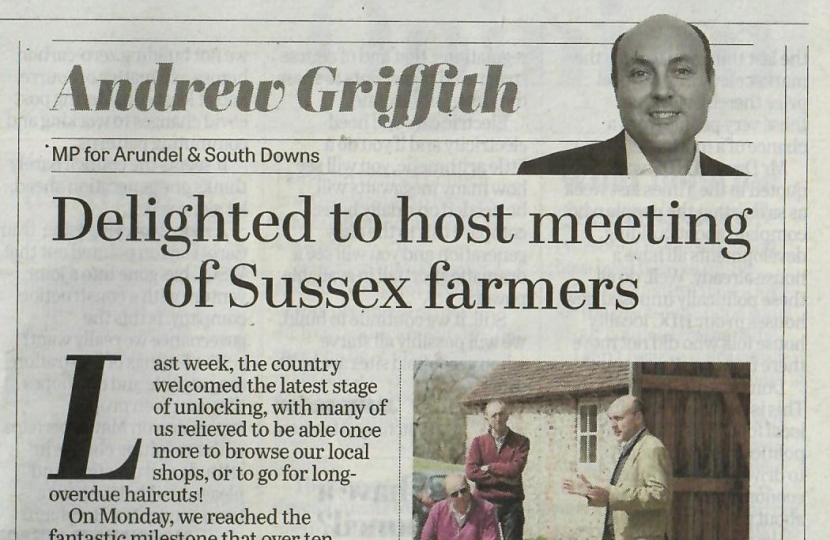 Last week, the country welcomed the latest stage of unlocking, with many of us relieved to be able once more to browse our local shops, or to go for long-overdue haircuts!

On Monday, we reached the fantastic milestone that over 10 million people across the country have now received both doses of the vaccine, with over 15% of the whole population now fully vaccinated, and over half of the total population having now received at least a first vaccine. This has been a fantastic effort from all involved and I congratulate all volunteers, pharmaceutical producers and medical staff.

On Friday, I was delighted to host my latest ‘roundtable’ meeting of Sussex farmers, which we held outdoors at Sullington Manor Farm to discuss the issues facing their industry.  It was a productive talk, and I have a lot to take back to DEFRA and to Sussex Police’s Rural Crime team.  I was especially intrigued to hear about Sullington Manor Farm’s “Old Workshop Supper Club”.   They will host a feast-like supper evening on 22nd May at their stunning rural setting - you can find out more by emailing info@sullingtonmanorfarm.co.uk

Last week in Parliament, I called on the Chancellor to introduce a stamp duty break for ‘downsizers’ to prevent new housing development on greenfield sites across West Sussex. With an ageing population, too many homeowners feel the tax gives them no option but to rattle around in accommodation that would be more suitable for growing families. Stamp duty is a real brake on downsizing, and removing it would remove a major bottleneck in the UK’s housing crisis.

In other news, this week the Government enshrined the world’s most ambitious climate target into law, reducing emissions by 78% by 2035 compared to 1990 levels. This will see us go further and faster than any other major economy to create a low carbon future.

As the Government’s Net Zero Business Champion, I see every day the resourcefulness with which businesses are reducing their climate emissions as well as the many opportunities this transition brings.