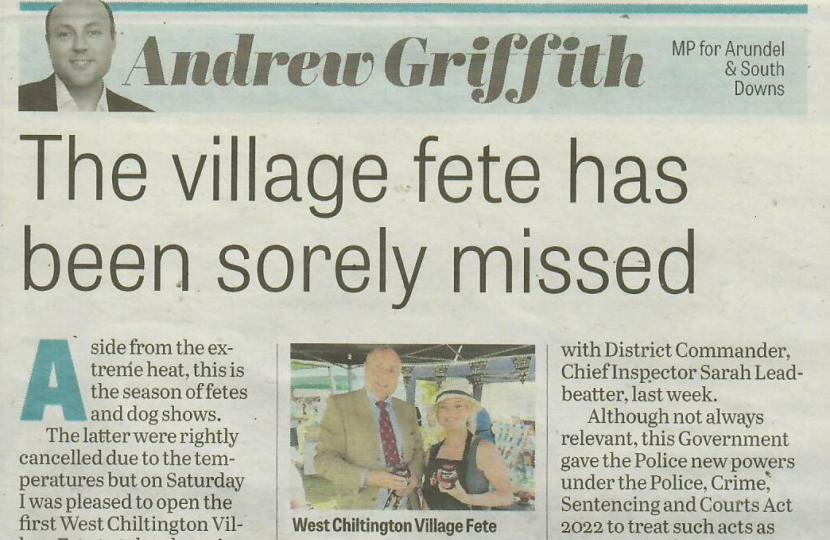 Aside from the extreme heat, this is the season of fetes, fayres and dog shows. The latter were rightly cancelled due to the temperatures but on Saturday I was pleased to open the first West Chiltington Village Fete to take place since 2019. It’s history dates back over 100 years and has brought together countless generations on lovely summer afternoons such as this one.  I also had the pleasure of meeting many local organisations and businesses and who had set up stalls at the show.  The fete proceeds this year raised money for a local phone box defibrillator, community care, and STEM project for the village school aimed at igniting local children’s interest in science.  Knowing that this event will have had a positive local impact that will be felt long after the stalls are taken are taken down emphasises the importance of these village events and why they have been so sorely missed over the past two years.

Over the past few months, we have seen too many instances of visiting travellers setting up unauthorised encampments across West Sussex. The latest was off the A259 in Angmering. In addition to bothering local residents, they are not welcomed by the traditional traveller community. I immediately raised this with Sussex Police including in my meeting with District Commander, Chief Inspector Sarah Leadbeatter, last week. Although not always relevant, this Government gave the Police new powers under the Police, Crime, Sentencing and Courts Act 2022 to treat such acts as a criminal offence rather than waiting for the landowner to have to go to court as was previously the case.

Finally, I was delighted to get a taste of local entrepreneurism through my visit to The Arundel Brewhouse Project, which has set up a high-quality taproom and café which also hosts events.  The Project specialises in craft (small batch) beer and I was pleased to hear that they have even had success exporting abroad to Scandinavia and are working on growing that part of their business. Definitely well worth a visit!