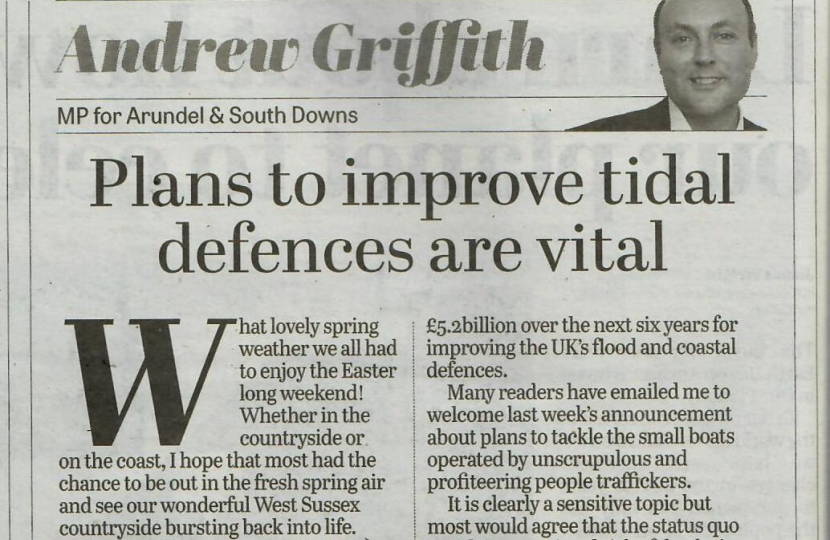 What lovely spring weather we all had to enjoy the Easter long weekend! Whether in the countryside or on the coast, I hope that most had the chance to be out in the fresh spring air and see our wonderful West Sussex countryside bursting back into life. For some, Easter marked the last vacation from school or college before we enter the intense summer public exam period. Thanks to the success of the vaccine programme these will be the first in person sittings for three years and I know that many students will be anxious. My thoughts are with you and my thanks to all the teachers who have done so much over these last few years.

I was delighted to have helped secure almost £200,000 for flood protection on the River Arun last week. The quiet activity of working with Ministers to deliver improvements for local people is often the last thing people think of when considering the work of their Members of Parliament, yet I regard it as one of the most important. Flooding can devastate communities and with development and some agricultural practices creating an increasing burden on our watercourses, the Environment Agency’s Arundel Tidal Defence Improvements Plan announced last week is vital work. It is part of a broader record investment of £5.2 billion over the next six years for improving the UK’s flood and coastal defences.

Many readers have emailed me to welcome last week’s announcement about plans to tackle the small boats operated by unscrupulous and profiteering people traffickers. It is clearly a sensitive topic but most would agree that the status quo – with its associated risk of deaths in the Channel – is not a desirable state of affairs. Britain has a proud tradition of providing sanctuary to those in need. In fact, this Government has done more than any other in recent history. Since 2015 we have offered a place of safety to over 185,000 in need – and that’s before the current unlimited offer to Ukrainian refugees and another 30,000 family reunion places over the same timeframe. To put it in a local context, this is the equivalent of the entire population of Worthing and of Bognor Regis combined. In a country where the settled population is ageing and would otherwise barely increase, much of the pressure to build on the precious green spaces of West Sussex or the strain on our hard-pressed public services arising from growth in population through immigration of all kinds. It is sadly not possible – as some like to claim – to be in favour of unlimited, open door, migration and simultaneously to protect our local communities from unsustainable development.

Excessive and anti-social vehicle noise has been a long-term issue which blights the lives of residents living in otherwise peaceful West Sussex villages.