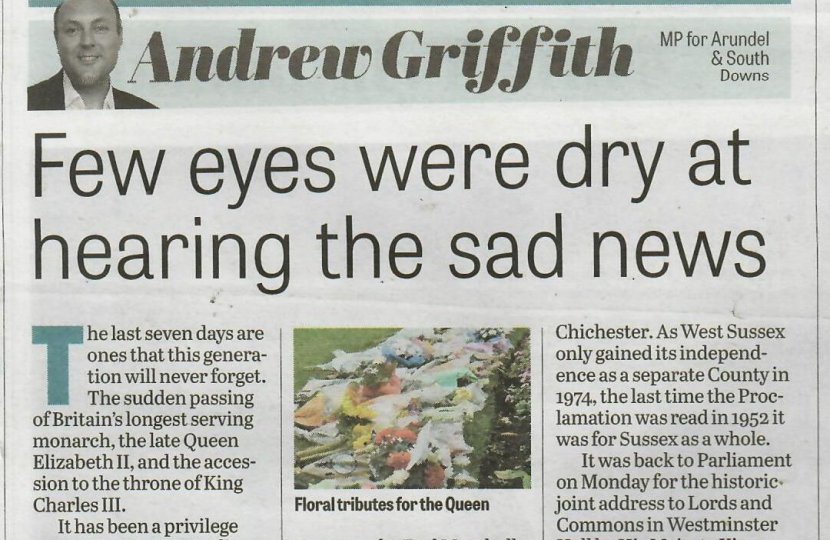 The last seven days are ones that this generation will never forget. The sudden passing of Britain’s longest serving monarch, the late Queen Elizabeth II, and the accession to the throne of King Charles III.

It has been a privilege to represent everyone living within the Arundel and South Downs constituency at this historical moment. Both Houses of Parliament have a role to play as part of the delicate framework of a democratic, constitutional monarchy. That is why you see so many current and former politicians at the ceremonies and giving their touching tributes. And it is our own, Arundel-based, Duke of Norfolk that is overseeing Her late Majesty’s funeral arrangements as the Earl Marshall – the most senior of all the Peers in England.

I was sitting in the House of Commons when the message was first passed to the Prime Minister about The Queen’s deteriorating health. Just hours later, few eyes were dry as we saw television programmes interrupted to bring us the sad news.

On Sunday, after a Requiem Mass in Petworth, I joined fellow Members of Parliament for the first ever Proclamation by the High Sheriff at County Hall in Chichester. As West Sussex only gained its independence as a separate County in 1974, the last time the Proclamation was read in 1952 it was for Sussex as a whole. It was back to Parliament on Monday for the historic joint address to Lords and Commons in Westminster Hall by His Majesty King Charles III.

Whilst everyone has their own story to tell about the late Queen and she visited West Sussex many times this is not just a national moment. It is one shared with the World and particularly The Commonwealth. We shared our own Queen with more than a dozen other countries, and such was her global reach that if you search online for Queen Elizabeth the Second, you will find over 1.6 billion results.