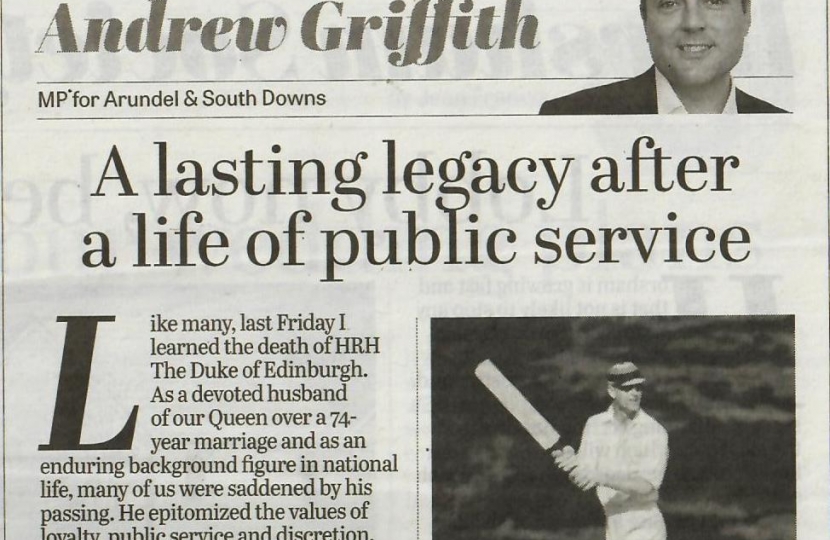 Like many, last Friday I learned the death of HRH The Duke of Edinburgh. As a devoted husband of our Queen over a 74-year marriage and as an enduring background figure in national life, many of us were saddened by his passing. He epitomized the values of loyalty, public service and discretion.

The Duke was familiar with Sussex, and I was intrigued by a photo I came across of him batting in a charity match at Arundel Castle, against the Duke of Norfolk’s XI in 1953. This June he would have reached 100 years old, but ‘99 not out’ is a fantastic innings, and what is even more valuable than his longevity is that he used his time to leave a lasting legacy.

Prince Philip founded the Duke of Edinburgh’s Awards – affectionately known as ‘DofE’ to those who achieved them – to spur young people’s sense of preparedness, community spirit, adventure and self-respect.  In the past 66 years, over 6.7 million young people completed an award. The Duke was also one of the first environmentalists, believing in the importance of protecting the natural world long before it was fashionable – he helped found the World Wildlife Fund in 1961 and served as their President until 1982.

All of the mainstream political parties rightly paused their local election campaigns out of respect last weekend, and will do so again on the day of the funeral this coming Saturday.

This week saw the long-awaited second stage lifting of restrictions where all retailers have been able to re-open along with hairdressers, gyms and beauty salons. Of course, one of the aspects many have been looking forward to most is the opening of pubs. The last year has been difficult for everyone, but none more so than the hospitality industry and our wonderful local pubs. Whilst there has been Government support, I am giving some practical support locally with a new Pub guide (www.southdownspubs.com) to promote their many attractions as we emerge from lockdown. We need to get residents back into the habit of going out regularly as well as reminding visitors of the wonderful pubs we have here in West Sussex.