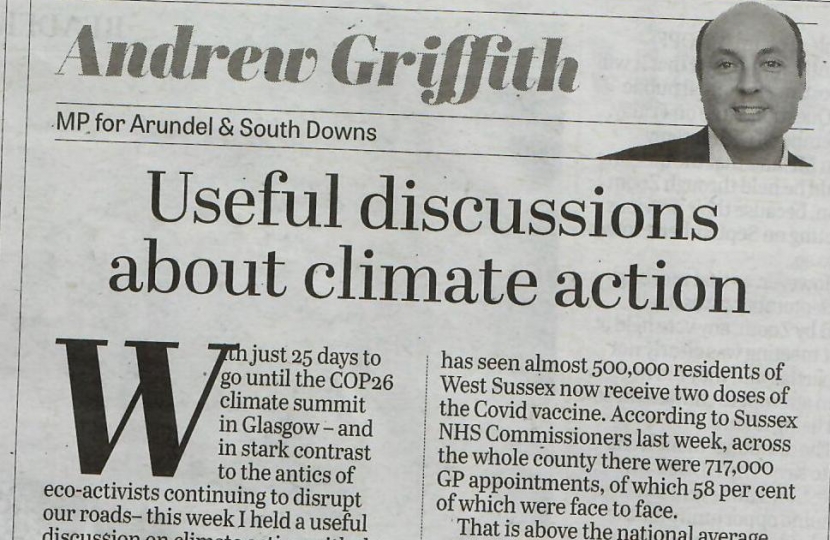 With just 25 days to go until the COP26 climate summit in Glasgow - and in stark contrast to the antics of green eco-activists continuing to delay ambulances taking people to hospital - this week I held a useful discussion on climate action with the parishioners of churches including Corpus Christi in Henfield; St Edward’s in Keymer; Our Lady Queen of Peace in Steyning; Our Lady of England in Storrington and Holy Trinity in Hurstpierpoint. We covered topics including debt forgiveness for developing countries, projects to reduce global deforestation rates, the role of financial institutions and green- banking, and the need for more nature-based solutions to restore coastal waters and waterways. As His Holiness Pope Francis said when addressing the issue of climate action last week, "This demanding change of direction will require great wisdom, foresight and concern for the common good: in a word, the fundamental virtues of good politics.''

Like other MP’s, my postbag has seen a steady trickle of correspondence from constituents about their difficulty in securing face-to-face meetings with their GPs. I understand that this is a source of intense frustration but also the short and longer-term challenges faced by our GP surgeries. One factor we must not overlook is that most GPs have been involved in delivering the vaccine, part of the wider effort that has seen almost 500,000 residents of West Sussex now receive two doses of the Covid vaccine. According Sussex NHS Commissioners last week, across the whole county there were 717,000 GP appointments, of which 58% of which were face to face. That is above the national average of 52% but clearly a long way short of the greater mix of in-person appointments that most would hope to see.  This evidence of pressure on GP surgeries underscores that planning authorities need to fully consider such important ‘social infrastructure’ before acceding to future housing developments in West Sussex and ensure that where money has already been set aside from past developments, that it is actually spent.

Finally, I remain focussed on the A285 between Petworth and Chichester which remains closed after a section of the road was washed away by heavy rains the weekend before last. I know how inconvenient this is for local residents as the alternative routes require a significant detour. I am in close contact with Councillor Tom Richardson and WSCC engineers were out this week conducting geotechnical and topographical surveys to how to make repairs. There have also been urgent meetings with specialist contractors and affected utilities providers such as BT and Southern Water. Frustratingly, the prognosis is that the road will remain closed for some weeks.  Improved signage has been installed to help divert traffic and I was able to help get the fallen tree removed at Sutton Hill which has helped ease some of the pressure on the area.

Last Friday, I joined schoolchildren from Arundel CE Primary and St Philips Catholic Primary in Arundel Town Hall to present a petition of more than 1,600 signatures calling for a cycle path between Arundel and Ford.   The petition was accepted by Councillor Shaun Gunner, the Leader of Arun Distr