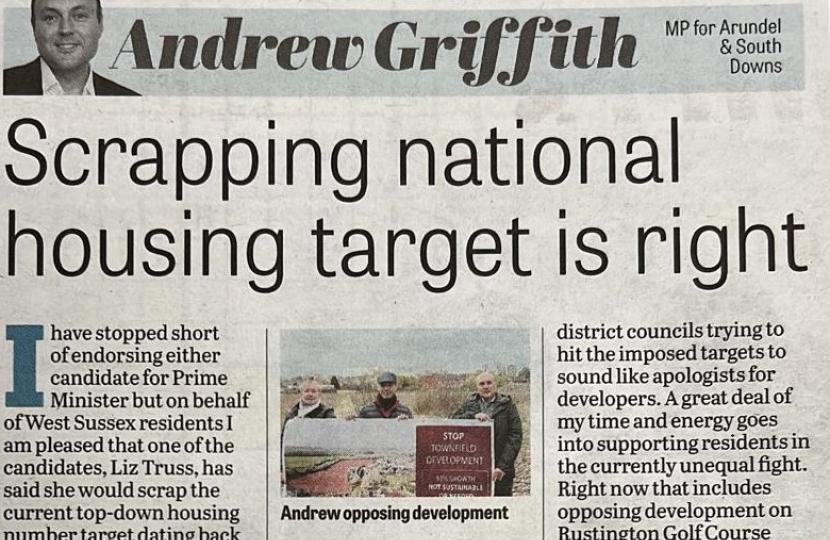 I have stopped short of endorsing either candidate for Prime Minister but on behalf of West Sussex residents I am pleased that one of the candidates, Liz Truss, has said a
government led by her would scrap the current top down housing number target dating back to the coalition with the Liberal Democrats. For this alone she deserves all of our thanks.

An arbitrary Whitehall target is the wrong approach to building the homes that we need and I have consistently opposed this as Member of Parliament for Arundel and South Downs. I led the successful 2021 Parliamentary revolt on changes to the formula (the ‘mutant algorithm’) that would have made the impact on our precious green fields worse but repealing national top down targets entirely is the right policy.

The target didn’t stipulate the type or the tenure of homes that we need, nor was it linked to demographics or the level of immigration. So,
instead of genuinely affordable starter homes or quality options for downsizers, we get too many similar developments of detached new builds in the wrong places and at the wrong scale.

It was corrosive for democracy too, frustrating parish councils and forcing district councils trying to hit the imposed targets to sound like apologists for developers. A great deal of my own time and energy goes into supporting residents in the currently unequal fight. Right now that includes opposing development on Rustington Golf Course where Arun District have rightly refused planning permission for a development of 191 new homes but where the developer has appealed this decision to the unelected Planning Inspector.

The frustration is that there have always been better solutions: building out the existing million planning consents, using brownfield land that has previously been developed.

Let's hope that freed from chasing the wrong target we can now pursue the right approach.