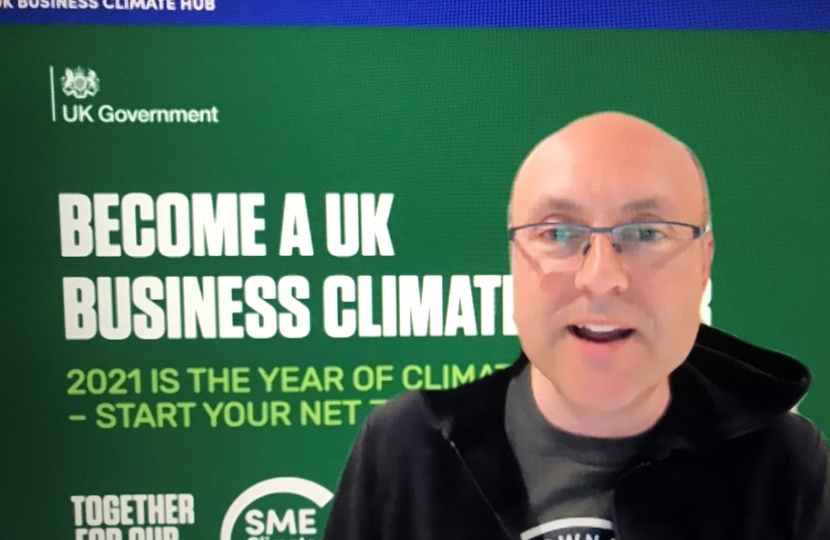 Andrew spoke to over 200 members of the Greening Steyning group at a special online event on Tuesday evening (27th April).

Attendees at the virtual ‘Countdown 2030 Event’, chaired by Greening Steyning’s co -Chairman Paul Hannam, heard from notable speakers including Isabella Tree of the Knepp Estate.  They shared their visions and actions for creating a greener community.

The Greening Steyning Group, which has been active for 10 years, announced their membership has grown significantly during the pandemic to around 1,000 members.  They have the collective goal in reducing carbon emissions by half by 2030.

Andrew talked about the Government’s world leading target to reduce CO2 emissions by 68% by 2030 and congratulated the Group for convening the event and for advocating practical ways that everyone can do their part.   The Group covered a wealth of topics including re-wilding gardens, greener energy for homes, repair cafes, and pedestrianising Steyning High Street.

“I am pleased to support Greener Steyning’s Countdown 2030 campaign and was encouraged by the participation of so many members of the community with a shared interest in taking the simple practical actions that can make a difference to the climate and nature. Actions like recycling in which West Sussex is already doing well and letting parts of gardens and verges go wild.”