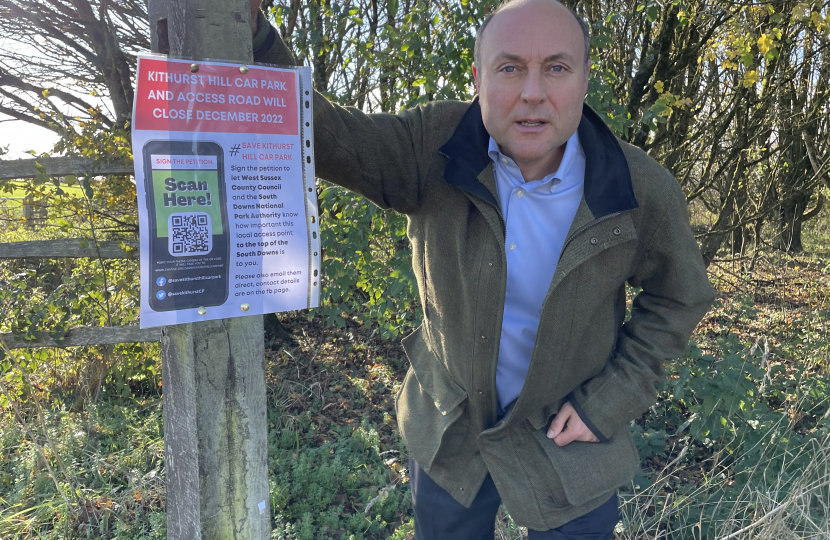 Andrew Griffith, the Member of Parliament for Arundel & South Downs, has congratulated community campaigners on winning a lifeline for Kithurst Hill car park.

Last week, it was announced that the possible closure of Kithurst Hill car park would be deferred until January 2023 to allow time for community organisations to properly explore options to ensure that the popular car park can stay open permanently.

The car park is regularly used by locals and visitors as a gateway to the South Downs, but was under threat from closure after the costs of keeping it open mounted.

A huge community campaign to save the car park, including a petition signed by thousands of local residents, was joined by local elected representatives in a bid to save the much-loved community facility.

This weekend, the local Member of Parliament met with Cllr James Wright, Cabinet Member for Environment and Rural Affairs at Horsham District Council, at the car park to celebrate the success of the campaign.

“It is excellent news that the community campaign has secured a lifeline in the campaign to keep this crucial asset open, ensuring we can all enjoy what the South Downs has to offer.

The campaign has my full support and I have been in touch with all parties involved to encourage a solution to be found.

We hear a lot from the National Park Authority about ‘inclusion’, yet the closure of this facility would hit the disabled, the elderly and those with young children the hardest.”

“I am encouraged that WSCC has agreed to keep the car park open until the end of January 2023.

This extra time will allow several organisations who are negotiating with the landowner to secure the long-term future of the car park.

What can an MP do?

Members of Parliament are elected to the House of Commons to represent the interests and concerns of all the people who live in their constituency, whether they voted for them at the General Election or not.