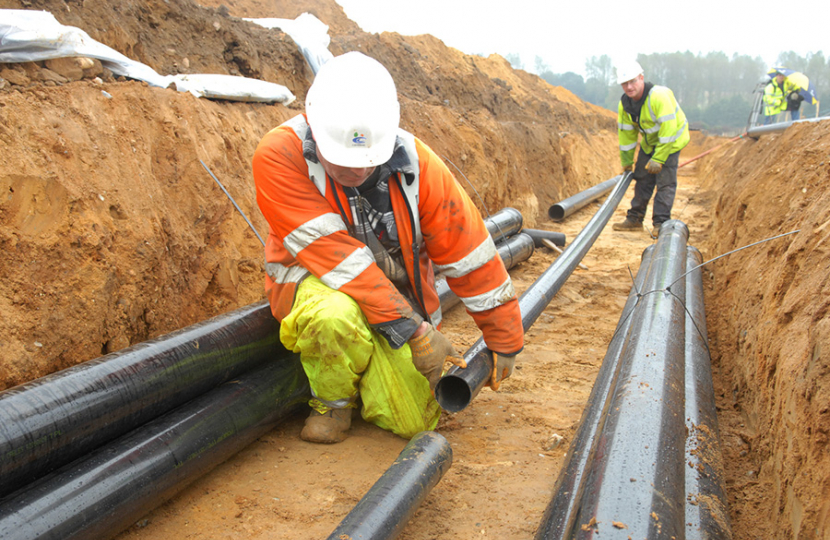 The MP made the point that the views of the consultation respondents are based on deep local knowledge and should be given due respect in the planning process.  He highlighted specific areas where there would be issues, as well as criticising sections of the route which will cause major traffic issues during the construction phase.  He also drew attention to homes, businesses and areas of sensitivity which will be impacted.

Vast swathes of delicate chalkland in the South Downs will be trenched to accommodate the cables and accompanying access roads which will run from Climping beach through to a new substation at Cowfold.

Andrew Griffith supports the submission made by Washington Parish Council who are outraged that the cable corridor will now dissect the village instead of taking a route around the south of the village as they had previously proposed.

Two areas - at Storrington and Cowfold - are designated as Air Quality Management Areas (AQMAs), but would be impacted from additional heavy traffic during construction.  Residents have also highlighted their concerns about rat-running via narrow rural roads.

Andrew also supports the plea of Ralph Dickson, whose planned Queens Platinum Jubilee Woodland on 70-acres of his land at Cowfold is now under threat from being trenched for a section of the Onshore Cabling Corridor.

More generally, the MP has highlighted the inadequate consultation with many residents, some directly affected by the proposals, saying they were not aware of the plans until only very recently.  The maps provided in the consultation make it difficult for most residents to ascertain where the location of the proposed route is.  Andrew Griffith fears that the lack of non-technical summaries will have discouraged a large number of potential respondents from engaging with the consultation.

“Whilst supportive generally of the expansion of offshore wind power, I remain unmoved from my original position in pointing out the well-justified concerns that so many residents in the South Downs have regarding the cable corridor and the location of the substation project.   It continues to be my long-held view that the North Sea offers far better opportunities to expand the UK’s low carbon renewable energy.”

“RWE must look again at their proposed ‘cable motorway’ and take into account the feedback from the consultation in order to engineer a route which causes less impact to residents, traffic, and areas of sensitive environmental value.”

The consultation for the proposed Onshore Cable Corridor has now closed (29th November).  Thank you to those of you who shared your views with me through the responses to my survey and individual emails.  I have reflected your views in my own submission to the consultation which you can read in t