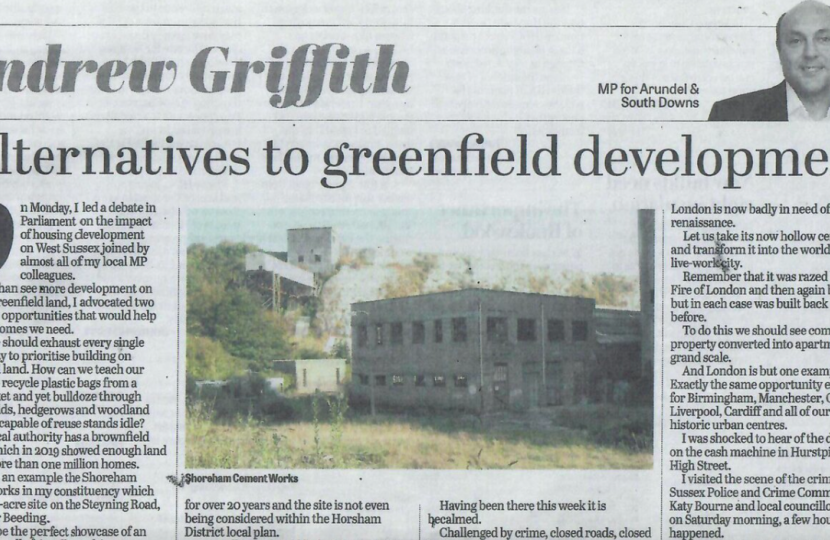 On Monday, I led a debate in Parliament on the impact of Housing development on West Sussex joined by almost all of my local MP colleagues. Rather than see more development on precious green field land, I advocated two alternative opportunities that would help build the homes we need.

First, we should exhaust every single opportunity to prioritise building on brownfield land. How can we teach our children to recycle plastic bags from a supermarket and yet bulldoze through ancient fields, hedgerows and woodland while land capable of reuse stands idle?  Every local authority has a brownfield register, which in 2019 showed enough land to build more than one million homes. I cited as an example the Shoreham Cement Works in my constituency which sits on a 44 acre site on the Steyning Road near Upper Beeding.  It could be the perfect showcase of an environmentally friendly, multi-use re-development of a brownfield site. It could provide over 2,000 quality apartment homes for a mixed community of downsizers and first timers. But it is an eyesore that has been derelict for over twenty years and the site is not even being considered within the Horsham District local plan.

Secondly, we should be looking to build more of the homes we need in our great urban centres, particularly London. Our great capital city is a global magnet for talent externally and should be the epitome of a thriving urban centre. Having been there this week it is becalmed. Challenged by crime, closed roads, closed bridges, congestion and Covid. No wonder that the August RICS survey saw 93% of businesses expecting to reduce their space requirement over the next two years. As well as fresh mayoral leadership, London is now badly in need of a renaissance. Let us take its now hollow central core and transform it into the world’s greatest live-work city. Remember that it was razed by the Great Fire of London and then again by the Blitz but in each case was built back better than before. To do this we should see commercial property converted into apartments on a grand scale. And London is but one example. Exactly the same opportunity exists for Birmingham, Manchester, Glasgow, Liverpool, Cardiff and all of our great historic urban centres.

I was shocked to hear of the digger raid on the cash machine in Hurstpierpoint High Street.  I visited the scene of the crime with Police Commissioner Katy Bourne and local councillor Joy Dennis on Saturday morning a few hours after it happened. Aside from depriving the local community of an important facility, this was a reckless act which risked major structural damage. It was pure luck that there were no residents in the floors above the break-in.