A27 improvements at Arundel 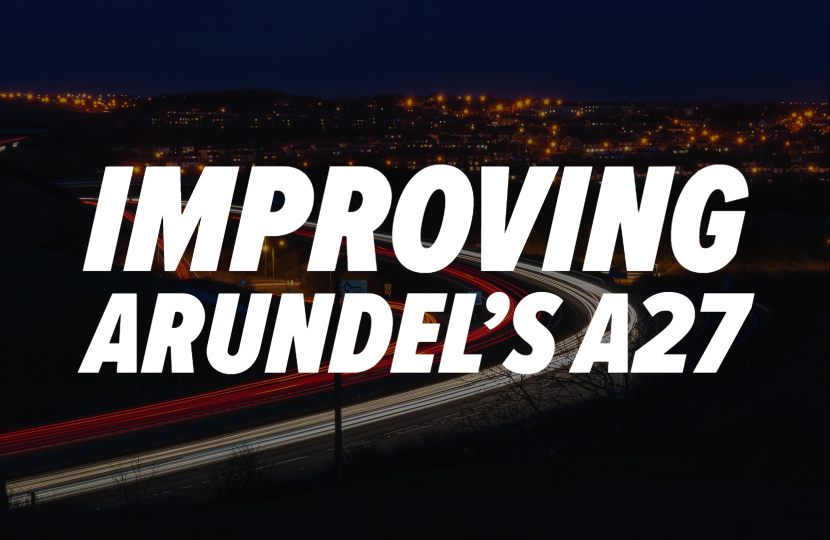 UPDATE - A27 ARUNDEL IMPROVEMENTS CONSULTATION: National Highways have opened a Public Consultation for the A27 Arundel Improvements from Tuesday 11th January until Tuesday 8th March 2022. You are able to have your say on the final route design by commenting during the consultation. You can find that consultation by clicking here.

Improvement to the A27 at Arundel is a much-needed project which I support. It will reduce congestion, enhance air quality, improve road safety and support much needed employment and economic growth.

This is one of the largest Government investments ever made in West Sussex and I am pleased to have worked with the Secretary of State for Transport and the Chancellor to secure the necessary support for Highways England to proceed.”

However, on the impact on residents of Walberton, Binsted and Tortington, it is very disappointing that the alternative routes which would have had far less impact on the residents of Walberton, Binsted and Tortington were blocked by certain areas having protected status and by the failure of the South Downs National Park to endorse any route within its boundary.  I am committed to supporting residents in getting the best noise mitigation, road design and, where appropriate, swift compensation although nothing can ease the pain on those whom it most affects.”

Some question whether we need to improve our roads at all.  Whilst I support a rapid switch to cleaner and quieter vehicles - and the UK is a leader in this respect - they will still need roads to drive upon and there is nothing environmentally friendly about pollution caused by congestion.

As you may know this is a project that has been off and on since the 1950’s when it was first suggested. The current single lane road around Arundel and Crossbush junction is a regular bottleneck operating way above its design capacity and will only get worse if nothing is done.

For residents of villages throughout the South Downs this will take traffic away from the local single carriageway roads which are some of the most dangerous in the country. In particular, it should reduce the number of inappropriate heavy good vehicles seeking to avoid the current peak time congestion and those ‘rat-running' motorists shaving a few seconds off their journey by speeding on quieter country roads. By reducing congestion this should significantly improve local air-quality with parishes such as Storrington having been an Air Quality Management Area due to high levels of NO2 air pollution since 2010.

The current pandemic highlights the importance of supply chains and whilst long distance commuting has declined, the usage of local roads has if anything increased.”

In his weekly column for West Sussex newspapers Andrew shares his views on the A27 Arundel Bypass and changes to cash access.

A27 Arundel Bypass update from Leader of Arun District Counci

West Sussex County Council have said, “Improving the A27 at Arundel, Chichester, Worthing & Lancing is the County Council’s highest priority for transport.  The improvements are needed to increase capacity, improve reliability and safety to help increase the competitiveness of local businesse